Home > Pests > What About Lice?
Lice (plural, singular=louse) are small (0.5-8 millimetres), wingless ectoparasitic insects found associated with vertebrates. They are found on all continents, including Antarctica. Many species are pale whitish or yellowish, while other species are brown or black. If feeding on blood, a louse’s colour may become considerably darker. 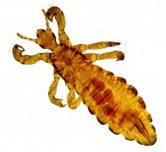 There are two types of lice; sucking lice and chewing lice. Most species of lice are found only on a single kind of host or on small groups of closely related species. The extinction of a bird or mammal species leads directly to the extinction of many of their parasites. Only species of sucking lice cause problems for humans.
www.entm.purdue.edu/publichealth/resources.html
Louse eggs or “nits” are sub-cylindrical in shape and are glued to the base of a host’s hair, feathers or clothing. They have an anterior operculum which is pushed off by the emerging first instar nymph. Louse eggs hatch in 4-15 days.
Living louse eggs tend to dark white, while dead eggs look white.

Head louse egg, ex http://www.liceworld.com/UK/biologi_formering_aeg.htm
There are three nymphal stages or instars which closely resemble the adult louse, but are smaller, lack external genital openings and have progressively more setae (bristles). Each nymphal instar typically lasts 3-8 days before moulting to the next stage. Lice have no pupal stage. Adult lice live for up to 35 days. Mated females glue 2-10 eggs per day, one egg at a time onto a hair, feather or clothing, depending on the species. Females are typically larger than males.

All species spend their entire lives on the body of the host animal. They require the constant temperature and moisture of this habitat to feed and reproduce. Lice are host specific and feed on a single host species (or close related species). Some are further specialized, in that they predominantly occur only on certain body regions of their hosts. The flattened bodies of lice are perfect for moving in the narrow spaces between feathers and fur. Their populations vary greatly in size and are strongly influenced by the condition and health of their hosts.
Dead, dried bodies of lice are found firmly attached to bird and mammal skins in museum collections, sometimes hundreds of years after the collection and death of their host.

Chewing lice feed mainly on feathers, fur, skin debris, or (rarely) blood of birds or mammals.
Sucking lice feed exclusively on the blood of placental mammals. Because of their blood-feeding habits, sucking lice are much more important as vectors of pathogens, especially with respect to human diseases.

Sucking lice have a broad partially flattened tube-like structure termed a haustellum with tiny teeth which latch onto the skin. Once in place, three sharp stylets are pushed through the skin until a host blood capillary is penetrated. Before feeding begins these stylets are withdrawn into a stylet sac inside the head. A cocktail of enzymes, anticoagulants and other compounds is secreted in the saliva. The blood is sucked up through the haustellum. The number of times they feed each day can vary, for example, head lice feed regularly every few hours, while body lice feed only once or twice per day when the host is resting.


The Public Health Significance of Lice


Lice can be of both direct and indirect importance with regard to humans. For example, human body lice indirectly carry and spread bacteria that cause the diseases: louse-borne typhus, trench fever, and louse-borne relapsing fever. They also directly cause pediculosis.

Three species of sucking louse are of significance to humans: the body louse, the head louse and the crab or pubic louse. Serious louse infestations commonly occur among the homeless, or persons in refugee camps and other crowded conditions that result from war and natural disasters.

HEAD LICE - "Nits"
Head louse - Pediculus capitis
Head lice are morphologically similar to body lice, but have a clear predilection for head hair. They are still common throughout the world with an estimated 6-12 million people, primarily children, infested each year in the United States alone. Especially at schools they can cause problems and it is difficult to get rid of them. They are passed from one host to the next when heads are close together.

Pediculosis
Head lice are not directly involved in pathogen transmission, but heavy infestations cause significant irritation and the resultant scratching can lead to secondary infections such as blood poisoning. Swollen cervical lymph nodes may accompany severe head louse infestations, as well a scabby crust may form on the scalp with large numbers of head lice typically living beneath it. 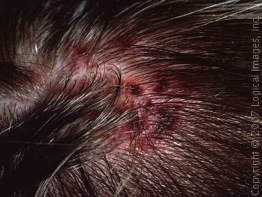 PUBIC LICE - "Crabs"
Pubic Louse - Pediculus inguinalis
Crab lice are squat lice with robust claws for gripping thick body hairs. Other than pubic regions, these lice can be found in armpits, eyebrows, eyelashes of both sexes, and also in male beards, moustaches and chest hairs. They are common worldwide and are often identified at STD clinics.

Pediculosis
Purple lesions frequently develop at the intensely itchy bite sites. These lice are not vectors for pathogens but secondary infections may occur at bite sites. 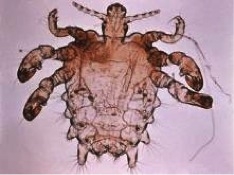 Pubic louse, ex http://tjilpi.typepad.com/tjilpi/2006/02/_careful_compar.html
BODY LICE
Body lice - Pediculus corporis Pediculosis
Body lice were once common throughout the world. They are now rare in the developed world, but persist in parts of Africa, Asia and Central and South America. Their bites often cause intense irritation for a few days, with each bite site developing into a small red elevation of the skin. Persons subjected to bites over a prolonged period may develop desensitization and little or no reaction occurs at the bite site. Persons with chronic body louse infestations often develop a generalized skin discolouration and thickening known as vagabond disease or hobo disease. They may also develop swollen lymph nodes, edema, elevated body temperature, headaches, joint and muscle pain and a rash. Occasionally people become allergic to the bites and develop generalised dermatitis or a form of asthmatic bronchitis. 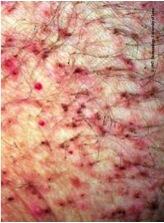 Also known as epidemic relapsing fever. This disease is caused by infection with the bacterium Borrelia recurrentis, vectored by body lice. It is most common in Asia, Africa, and Central and South America. The lice become infected after feeding on an infectious person. No animals are affected by this disease.

After ingestion by the louse, some bacteria pass through the gut wall and colonize the haemocoel where they multiply into huge populations. They are effectively trapped in the louse and the only way they can be transmitted to another person is by crushing the louse on the skin and causing a small abrasion through which the bacteria can enter the body.

Symptoms include head and muscle aches, nausea, anorexia, dizziness, coughing, vomiting, decrease in blood platelets and abrupt onset of fever. The most characteristic symptom is the presence of afebrile periods followed by periods of fever. These relapses usually occur 2-5 times before the disease dissipates. In severe infections, the liver and spleen become swollen, breathing becomes painful and the patient typically lies prostrate, shaking and taking shallow breaths. Mortality in untreated cases 5-40%. Antibiotics combat this disease.

Louse-borne relapsing fever occurs in epidemics amid poor living conditions, famine and war in the developing world. Historically this disease was responsible for 5 million deaths in eastern Europe and Russia during an epidemic lasting from 1919-1923.

Also known as jail fever, epidemic typhus and exanthematic typhus. This disease is caused by the rickettsial bacterium Rickettsia prowazekii and is vectored by body lice which become infected after feeding on an infectious person. Rickettsiae ingested by the louse colonize the cells that line the gut, replicate and burst free into the gut. Some are then voided through the louse’s faeces, which are typically deposited on the host while the louse is feeding and are able to penetrate the skin when the bite site is scratched by the host and infection begins. Infectious rickettsiae can remain viable in louse faeces for up to 30 days and it has been suggested that aerial transmission may also be possible.

Symptoms usually appear 10-14 days after the initial exposure: malaise, muscle aches, headaches, coughing, rapid onset of fever and a blotchy rash on the chest or abdomen. In severe cases, the rash will cover much of the host body. Later-stage symptoms in untreated cases include: delirium, prostration (total exhaustion or weakness), low blood pressure and coma which may result in death. Fatalities are usually 10-20% but can be up to 50% in untreated outbreaks. Prompt antibiotic administration is usually curative.

Louse-borne typhus is relatively rare today, but persists in some parts of the world including United States, Russia, Asia, Africa, Central and South America. A recently outbreak in refugee camps in Burundi in 1996-7 was the largest epidemic of this disease since World War II and may have involved as many as 500,000 people. This demonstrates that although this disease appears to be less prevalent, it has the potential to emerge rapidly under certain conditions.

This disease is also known as 5-day fever or wolhynia and is caused by the bacterium Bartonella quintana. Body lice become infected with this bacterium when feeding on the blood of an infectious person who may or may not show clinical symptoms. The bacterium invades the midgut of the louse, replicates and is eventually voided in the faeces. It is transmitted to a new host when the faeces are scratched into the skin. Infection ranges from asymptomatic through mild to severe, but death is a rare outcome.

This disease was unknown prior to World War I when in 1916 more than 200,000 (British cases – other countries over and above this number) European troops engaged in trench warfare presented with symptoms including headache, muscle ache, fever and nausea, with disease episodes alternating with afebrile periods. The disease agent was identified, body lice implicated and then the disease virtually disappeared until World War II when it resurfaced in troops under similar conditions.
Trench fever is generally considered rare today, although it has been recorded recently as an opportunistic infection of homeless, chronic alcoholic or immuno-compromised individuals. In these cases, it manifests as mainly vascular tissue lesions, chronically swollen lymph nodes and endocarditis (inflammation of the heart valves) and has been called urban trench fever.

Of indirect importance to humans are certain rodent-infesting sucking lice which are vectors of zoonotic pathogens.
Although chewing lice have little involvement in human disease one species, the common dog louse (Trichodectes canis), serves as an intermediate host of the dog tapeworm Dipylidium caninum which can be transmitted to humans. Some chewing lice species are known to transmit pathogens to birds and others are suspected to transmit pathogens to wild mammals. 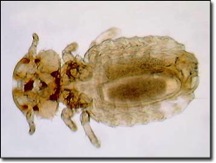 
Head lice are generally treated using pediculicidal shampoos. These are not completely affective against the nits, so the treatment should be repeated 1 week later to get any newly hatched nymphs. The use of lice combs is strongly recommended.
The following precautions can be taken to reduce the likelihood of a head lice infestation:
In the case of a body lice infestation : The reduced incidence of people infested with body lice has been achieved mainly through insecticidal intervention and increased hygiene standards, predictably accompanied by a global reduction in the prevalence of louse-borne diseases.

Chemical pesticides are commonly used to kill lice on poultry and livestock; however, there are concerns over the safety of using these chemicals on large numbers of animals on a regular basis. There is also evidence that some lice are becoming resistant to pesticides. Louse resistance to pesticides was noted by the fact that fewer and fewer lice are killed with each application of the same amount of chemical.