Every year since 1996, one week of June is designated National Mosquito Control Awareness Week. This is a time to raise awareness about how mosquitoes affect people’s daily lives and draw attention to the services offered throughout the United States and worldwide.


​
More useful links
Mosquitoes, Why We Should Clean Up Our Backyard?

16. Smelly feet are attractive to certain species of mosquitoes – as is Limburger Cheese. and lactic acid.
17. The smell of chocolate confuses them. The carbon dioxide we exhale excites and attracts mosquitoes, which is a bummer since we can’t exactly stop breathing to prevent their stealthy attacks. But researchers have found that certain scents – some of them minty, some fruity, and some that smell like caramelized chocolate – can stun the buzzing bugs’ carbon dioxide sensors, thus making it harder to find their next dinner.

18. Dark clothing has been shown to attract some species of mosquitoes more than lighter coloured clothing.
19.Mosquitoes fly an estimated 1 to 1.5 miles per hour. That might sound fast, but in the insect world, mosquitoes are actually rather slow. If a race were held between all the flying insects, even butterflies would finish well ahead of the skeeter.
20. A mosquito's wings beat 300-600 times per second.
This would explain that irritating buzzing sound you hear just before a mosquito lands on you and bites.
21. Mosquito mates synchronize their wing beats to perform a lover's duet.
Scientists once thought that only male mosquitoes could hear the wing beats of their potential mates, but recent research on Aedes aegypti mosquitoes proved females listen for lovers, too. When the male and female meet, their buzzing synchronizes to the same speed.
22. Salt marsh mosquitoes may travel up to 100 miles from their larval breeding habitat.
Most mosquitoes emerge from their watery breeding ground and stay pretty close to home. But some, like the salt marsh mosquitoes, will fly lengthy distances to find a suitable place to live, with all the nectar and blood they could want to drink.
23. Mosquitoes generally fly below 25 feet (7.6m). However, some species have also been found at extraordinary heights, including 8,000 feet (2500m) up in the Himalayas.
Sources:

Some Not So Fun Facts About Mosquitoes 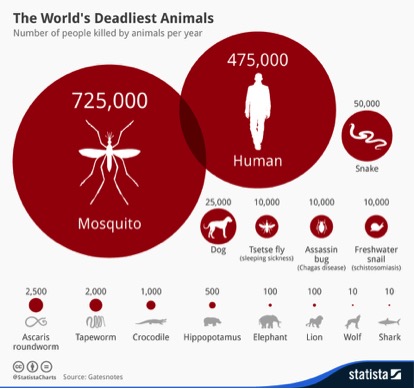